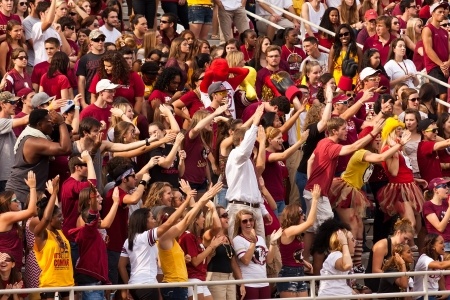 It’s no big secret that college football stadiums typically have higher maximum capacities than professional football stadiums do. And thanks to this, the atmosphere at a college football game is often far more intense than it can be at a professional game. Think about your favorite team, and how many fans they have. Now, imagine tens of thousands of those devoted people all together in the same location. How can that not be an energetic and electrified atmosphere? This is just one of the many reasons why going to an NCAA game is a fun night of entertainment.

Why Are College Stadiums Bigger?

A lot of people wonder why college stadiums are bigger than professional stadiums. Of the 20 biggest football stadiums in the United States, only one is solely used for pro football: MetLife Stadium. That stadium can hold as many as 82,500 people. AT&T Stadium, the home of the Dallas Cowboys, can hold as many as 105,000 people, but special modifications are needed for this, and they only do it rarely, usually for college football games. The biggest stadium in college football—Michigan Stadium, home of the Wolverines—can hold more than 107,000 people.

So, why are college football stadiums so much bigger? Well, college football teams have their own built in audience. The best and most popular teams are all Division I teams, and hail from huge schools. Penn State has over 97,000 enrolled students, and they have the second largest stadium in all of the NCAA. Beaver Stadium can hold more than 106,500 fans. The University of Michigan, who has the largest stadium, has about 43,000 students. When it’s game day, a huge percentage of that population goes. Unlike NFL games, who often have to fight for their fans and have people travel from all over the country to come to games, NCAA teams have tens of thousands of young fans directly built into their attendance. Students can usually get tickets for very cheap, too, making it even easier for them to go to the games.

The huge crowds that go to college football games make watching the game far more exciting. Watching a game with a few friends on a couch is fun, but watching with thousands of other people is a far different atmosphere. One is quiet and friendly, while the other is loud and intense. Sharing a sporting event with a lot of other fans also creates a sense of camaraderie that is unequaled anywhere else. It’s a way to enjoy your favorite team in a public manner. You can dress up in your team’s colors, paint your faces, sing loudly, and no one will judge you, mostly because they are all doing it too. Again, there’s a reason why college football games attract such a devoted and large following to them. Getting to be a part of that action is something that no one ever forgets.